The police car flew past me last night with lights flashing and sirens blaring. I had the vantage point of sitting in the cross traffic. I watched cars pull over, many pulled from their distracted thoughts of a baseball game or dinner plans or the events of the day. It was life as usual as they made their way through the last minutes of the commute hour. The police car sped down the street and, as is my habit, I said a quiet prayer for the safety of the officer and all those involved before returning to my own distracted thoughts of routine life. I looked at the clock. I was running late for the meeting with my Guide Dogs for the Blind Puppy Club. I would need to move quickly when I pulled into the parking lot. I shuffled in with another puppy raiser. Pleasantries were exchanged as we caught up on the details of each other’s lives and puppies.

As she shared the news coming from her daughter’s text messages, each of us began sharing our individual sitings of the police vehicles that sped past our cars as we made our way to the meeting. “There was an active shooter at Walmart.” I watched the faces of those around the table as we each tried to process another act of senseless violence. “People were down.”  Though no one said it aloud, I doubt I was the only one pondering the possibility of a terror attack; the Halloween terror attack in New York still fresh and unsettling. “The shooter or shooters were on the run. They are considered armed and dangerous.”

He…She…They…? As they often are during the moments, hours, or even days following random violence, immediate details were sketchy. But, somebody was on the run, not far from where we all sat and in the direct vicinity of where we had planned on going next. I checked my phone for an update as we made plans to change the location of our customary Starbucks run.

As we left the building, I felt the adrenaline coursing through my veins, pushing me to walk a little faster. I decided my pup would wait to relieve until we reached the Starbucks further away. I didn’t need to be standing in a well-lit parking lot just up the road from an active crime scene.

As I crossed the traffic to enter the freeway on-ramp, I looked to my right. Could I see the lights of the emergency vehicles in the Walmart parking lot? I was trying to put pieces together. Those same emergency vehicles sped through traffic not even 2 hours earlier. The first-responders rushing to “serve and protect.”  The drivers, like myself, yielding to the lights and sirens. No one expecting the tragedy that had unfolded in the blink of an eye.

No one awoke yesterday thinking they were walking into the day that would change everything, but 3 people didn’t return home from their Walmart trip last night. The day before, 8 people didn’t finish their trip on a pedestrian pathway in New York. Last month, 58 people were killed and another 546 shot while attending a concert. In the blink of an eye, life changed forever.

No one awoke yesterday thinking they were walking into the day that would change everything, but roughly 4,600 people in the United States were diagnosed with cancer. Yesterday, an average of 121 Americans took their lives and countless others did their best to simply make it through their day, hiding the pain of their own struggles behind a false smile. Globally, an estimated 151,600 people died and another 360,000 were born. All in the blink of an eye.

Life changes. It moves forward. But, life is so often dictated by the events that happen in the blink of an eye. Last night, before I let the veil of sleep consume me, I thought about the people whose lives were forever changed during the course of the day: those that won’t return home; those left behind; those scarred by events that they never anticipated when they awoke; those just doing their best to make it through another day with every ounce of their being; and those feeling vulnerable to life’s blinks. Quietly, I prayed for them, for their friends and family, and for our world.

Then, I prayed that I am placed in the path of someone whose life I might help make better because change can come in just the blink of an eye. 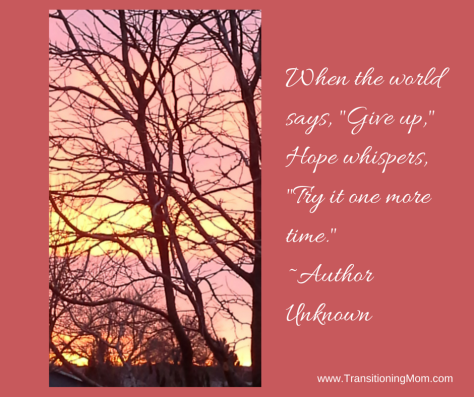 I watched limited coverage of the news last night. I saw enough to know that, as predicted, Ferguson erupted in anger and violence. Peaceful protests were quickly lost in the rampage. Anger coursed through the streets of the small town, and spread across the country with protests springing up in Denver, Chicago, Oakland, New York, and more.

I watched little coverage because the anger jumped from the screen and began coursing through my veins. I felt powerless and frustrated as the images flashed across the screen. As I wrote yesterday, I was not privy to the evidence and testimony the Grand Jury poured over since being sat August 25, nor have I read the newly released documents from the hearing. I did, however, pay attention to the announcement, when it was finally made.

When the “no indictment” ruling was read, I empathized with both sides. How could I not? There are parents who still mourn the loss of their son and now left feeling justice was not served. On the other hand, there is a young officer, a newlywed, whose life is forever changed and his career (at least in Ferguson) likely ended. My heart breaks for all parties involved. So many lives changed in the matter of minutes.

Crawling into bed last night, I turned on the TV to hear the updates before I said a prayer and closed my eyes. I hadn’t watched any of the “live coverage” as it unfolded. The replayed images were horrific enough. More lives changed, possibly destroyed, as business were burned to the ground in Ferguson. People scurried through broken windows and emerged with arms filled with stolen goods. Cars were set ablaze. Tear gas canisters were set off to control and disperse a crowd.

Then, I heard it, and my blood boiled. The reporter said the protests had turned violent, that protesters were looting and setting buildings on fire. No, no, no! I reject the notion that those who were there to protest the verdict are the same that set a building ablaze. I reject the theory that the woman, man, or child that set out with a sign to express sadness and ask for change is the same that emerged from their home with a mask to conceal their identity and commit a crime. I reject the idea that all protestors turn violent when race is at the central issue.

I’m not foolish. I understand the concept and reality of the “mob mentality.” On the small TV screen in my bedroom last night I watched anger unite strangers and tear through a community without discretion. I blurred the images I saw last night with those that I saw those many years ago during the Rodney King riots. In both, the voices that had gathered to peacefully protest were drowned out by the destruction of anger and a community is left in disrepair. Peace was lost in the ashes of despair.

Thankfully, there was no loss of (physical) life last night. Still, a great deal was lost. Ask the man who stepped on the bus this morning to go to work only to step off the bus in front of the Dollar Store where he (once) worked at and found it burned to the ground. Ask the owner of the local Cesar’s Pizza, who spent part of his evening trying to turn away the angry mob from his livelihood, only to lose the battle in the wee hours of the morning.

Ferguson stands broken this morning. Businesses lost, jobs gone; someone’s life’s work, their hope for a better future, and their place of purpose wiped out from the anger that fuels the divide in this country. Once again, lives changed in the matter of minutes.

I don’t have the answers. I don’t know that anyone does, yet. What I do have is hope. Washing out my television’s image, the sunrise shined through the front window this morning. I saw slivers of the early morning colors in my living room before I stood to open the curtains. As I drew back the sheer drapes, brilliant pinks and golds streamed past the bare branches and showered me with hope, the hope that comes with a new day. Just as I watched anger unite a mob of criminals last night, I’ve witnessed pain, horror, and disbelief unite a country. After the terror of 9/11, there was a warmth strangers shared, looking at each other in the eyes, lending an ear to the individual stories that stretched from family to family, state to state, and country to country, weaving us together as a nation and a world. United by the unimaginable criminal events of a clear September morning, hope reigned then, and the optimist believes hope can reign again when we, as a nation, say “try it one more time.”